Surrounded by original pieces, Tatum finishes up some paperwork at the register. Tatum keeps smaller items, like the Spurs candles at the register for quick sales. Photo by Betty Wright Rueda

On a muggy Sunday morning, local artist Robert Tatum was casually smoking while sitting outside of his shop, Choice Goods, located at the Blue Star Arts Complex in Southtown.

Tatum, a native Californian, moved to Texas 25 years ago and became part of the complex’s artistic inception.

“I didn’t choose Blue Star; it chose me,” Tatum said. “When it comes to the arts, Blue Star Complex has been very consistent for the last 20 years.”

Blue Star Arts Complex is one of three components of Southtown was established in 1986 and runs adjacent to the Riverwalk.

The one-block complex is the centerpiece for many artists to come and share their creative works with the community. Upcoming artists and vendors set up shop at The Brick, a large venue that is home to many events like First Friday.

“You come on a First Friday, it’s a great mix, it’s a melting pot, full of diversity and cultures, and this is through the power of art,” Tatum said. “San Antonio has always been so segregated where different demographics of people stay only on their side of town but this event that reaches out to all different locations to bring people together.”

Joaquin Abrego, is an interior designer but has a second passion for creating pop art, a style that is based on modern popular culture and the mass media.

“I just like the market and Blue Star is really appreciative and encouraging of the artwork, also the creative aspects of San Antonio,” Abrego said on a recent Sunday at The Brick, an event venue at the complex. “So, it really is a good place to get recognize and do networking.”

Garcia, who started as a visitor, evolved into selling her crafts at The Brick as well as the Blue Star.

Blue Star gained the attention of a younger demographic while still upholding traditions that made this area grow in popularity.

Tatum originally started with his company called Tatum Originals which turned into Choice Goods that brands and sells lowbrow art. Lowbrow art is defined as having a sense of humor which is gleeful, impish and sarcastic.

Tatum started in San Antonio doing “pop up spots,” or tent displays, in the Southtown district, specifically on South Alamo Street in 1993 and 1994.

Considered to be the anchor of Southtown by some locals, Tatum has been involved in shaping the culture for what it is today.

Tatum has been involved with the Council of Southtown, a neighborhood group, since 1993 and created a logo for it. He created and founded Art in the Hood, that connected all the artists in San Antonio to an abandoned space (building) to present their artwork.

Art in the Hood started in the early ‘90s, and lasted five years, according to Tatum. This event became a stepping stone for the monthly event, First Friday.

It was the council’s vision to use the Blue Star Arts Complex as the centerpiece of the arts in San Antonio. Being a part of the King William District in San Antonio, there are rules and regulations in order to have events like First Friday.

When the King William District labeled neighborhoods around Blue Star Arts Complex as Southtown, many artists came out to support the integration through events and opening new studios.

With all the changes that have occurred in Blue Star Arts Complex, there is one thing that has remained the same: community.

“It’s not about the money or the business side of First Friday or the Blue Star, it’s about bringing the people together and that’s what Southtown represents,” Tatum said. I am junior at Texas A&M San Antonio that majors in Mass Communications and minors in Sociology. I enjoy writing blogs and develop podcasts that are usually covering what’s happening in the sports world . When I’m not writing, I enjoy traveling and going to concerts. My major goal is to be a sportswriter for the WWE, by being apart of the Mesquite I hope to improve my writing and creative focus on stories. 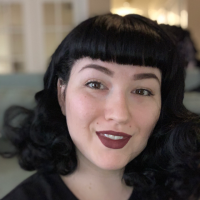