Holocaust Survivor Reaches Out to Youth

Poland 1939, 12-year-old Rose Sherman Williams and her family found themselves caught in the grip of Nazi invasion. Decades later, now 90-years-old, she dedicates her time actively reaching out to the public to share her story at schools and museums across the state.

In late April, Texas A&M University-San Antonio welcomed Williams to share her story of survival and hope at an event open to both students and the public. Phi Alpha Theta and history professor Dr. Edward Westermann presented the event that marked the university’s sixth annual Holocaust Remembrance Day.

As the last few people took their seats in the campus auditorium, Williams made her way on stage. She moved slowly, but confidently as she walked to stand next to Westermann behind the podium. Westermann took a moment to introduce Williams and to stress the importance of her visit.

“We’re losing our generations of survivors,” Westermann said. “One of the promises we have to Rose and all the survivors who may come out to share their story is that we will be their witnesses.”

As Westermann stepped aside, Williams moved forward and adjusted the mic down to her small stature. She slowly scanned her audience and gave a small smile in greeting.

“I’m here to speak to you about those who cannot speak for themselves – the victims of the Holocaust.”

Williams took the audience back to where her Holocaust story began – Radom, Poland. There she lived surrounded by her grandmother, parents and three siblings. Life for the close-knit, happy family changed forever when the Nazis invaded Poland in September of 1939.

Williams told how the lives of the Jewish people quickly became insufferable. Jewish children no longer received public education, suffered from a lack of food, and the Nazis forced all Jewish people to wear yellow armbands as identification. Within weeks, they were forced from their homes.

“We received a letter from city hall telling us we needed to be out of our home in one hour,” Williams said. “Can you imagine having to leave your home forever in just one hour? What would you take?”

Williams and her family moved into a ghetto, where they lived in a single-room basement without heat or water. She told of what a horrible time it was for her family, living in fear as people continuously disappeared around them. Men told stories of gas showers and crematories, insisting that the work camps were liquidation camps.

“We couldn’t believe it, we didn’t believe it,” Williams said. “How could, in such a cultured country like Germany, how could such atrocities be possible?”

The ghetto is completely liquidated by August 6, 1942. Her family made the difficult decision to stay together and face an uncertain fate. As Williams stood in line with her grandmother, they noticed a group of Germans pulling children from mothers’ arms and tossing them onto the ground.

Unable to simply stand-by, Williams’ grandmother stepped forward to help the children. While she begged her grandmother to get back in line, their commotion caught the attention of a Nazi officer. He came over and hit Williams hard on the head, forcing her to the ground. Seconds later Williams heard a gunshot, and saw her grandmother’s body fall by her feet.

“It took me many, many years to be able to block out that vision from my mind,” Williams said through voice-cracking tears. “My grandmother at my feet, and wondering how many people would step on the body of my grandmother with me unable to bury her.”

Williams was separated from the rest of her family that day and sent to an ammunition factory to work. There she befriended Elsie, a young woman who became her greatest support. At the start of 1944, they were shipped out in train cars packed tightly with anywhere from 80 to 90 people. Williams recalled how the smell alone could kill. The train took them to Auschwitz, where Williams lost her name to a number tattooed on her forearm. From that point forward she answered to A15-049, a number that still marks her skin today.

After suffering through unbearable conditions, and frostbitten feet, Williams lost all hope. She begged to be sent to the gas chambers. In a twist of fate, “Angel of Death” Dr. Mengele, refused her plea and spared her life. He looked over her face and insisted she was still young and useful. Not long after, Williams learned her younger sister was also in Auschwitz and reunited with her through Elsie’s help.

“It was almost the end of 1944,” Williams said, “When I got together with my sister, my whole attitude, my whole belief in God returned. I was not alone.”

Williams, her sister, and Elsie moved two more times, their last move leaving them in Bergen-Belsen, where they saw days without food, water or bedding.

The dreadful conditions made Williams thankful they only had to endure it all for a few months. The camp was liberated on April 15, 1945.

As Williams’ story came to an end, Westermann returned to the podium and encouraged the audience to join her on stage for questions and pictures. Audience members formed a long line to meet Williams. Many people hugged her, thanked her, and took pictures with her.

“I’ve always been interested in hearing a Holocaust survival story like this,” said Belen Cerna, a junior at A&M-San Antonio. “I would be more inclined now to go listen to others on my own, outside of class.”

“Listening to her story definitely makes me more appreciative,” Martinez said. “We don’t realize how much we take for granted until you hear a story like hers.”

The weight of Williams’ words lingered in the air. As students filed out of the auditorium, she hoped they all left with an understanding of how hope and faith can prevail.

“My hope for young people is that you all believe in yourselves, be strong, love yourselves; and you all should succeed.” Williams said.

For more information on Williams’ story and those of other San Antonio Holocaust survivors, please visit the Holocaust Memorial Museum of San Antonio. 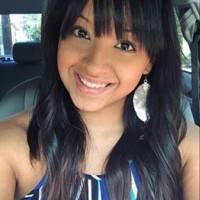